The Genesis creation story and its language are so familiar to me that I have had a tendency to take them for granted. They are often parodied in this post-Truth world, treated with reverence and irreverence alike. Some believe the story contains deep truth, while others see it as a primitive and toxic mythology that shackles our autonomy and individuality.
When I picture the creation of the world, my mind’s eye is saturated not only with imagery from European Medieval and Renaissance art, but also with the rich imagery of modern scientific cosmology. I scroll regularly through NASA’s Instagram feed in wonder. It’s hard to forget the first time I saw the Hubble deep field composite image of the universe with its myriad galaxies. I picture observable, data-driven constructions of what the universe looks like and how that might have unfolded over time. And I think of the many images of the modern creative imagination and science fiction. I have to ask myself whether these images are helpful when I stand before a document like the Hebrew Bible, which was created thousands of years ago, before Renaissance and Enlightenment ideas and the birth of modern science. I certainly don’t want to discard them, as they are rich and full of their own kind of beauty.

When imagery and ideas grow familiar, sometimes we quit looking deeply into them, and we can even be at risk of losing sight of them completely. After diving into theological expositions of the creation account like Dietrich Bonhoeffer’s Creation and Fall, I began to be curious about all the metaphysical richness that seemed to hide in the shadows behind the seemingly familiar Genesis creation narrative. I had stopped looking too closely—or maybe I had never looked close enough to begin with. I could no longer see the original image, and inevitably a new image had come to replace it. This new image had been formed by fear, doubt, and various interpretations of scripture from both the sacred and secular worlds.

After hearing Dr. Tim Mackie speak in a recording from a conference on science and faith, I began to wonder if I could do a deep-dive into the ancient Near Eastern conception of the cosmos to try and find some of their images. These images of Genesis that existed before modern science, before Renaissance art driven by western ideologies, before the natural world had begun to replace the spiritual world. These were the images of creation that all of the Hebrew authors drew from as they wrote scripture in partnership with God. These were the images of creation in the world of Jesus of Nazareth.

I believe that scripture is God-breathed, that it stands outside of time in a very real way. But I also believe in the incarnation: God walked the earth in a real human body—Jesus—who existed within a time and cultural context—first century Palestine. God worked with and through a community of mortal human beings from the ancient world to bring his eternal Word into the world at a very particular time. So that means that Genesis had a very specific meaning and context for its first audience, and that could not have included modern science, since it did not yet exist. To read the Bible through a lens that forces it to conform to modern cosmology is to assume the risk that such twisting will distort its message.

I would submit that the issue of what imagery we see in our mind when we read Genesis is one we should all consider as thoughtfully as the words themselves. Images and ideas are practically inseparable and are vastly important in shaping the way that we view the world, and whether we like it or not, we swim in a sea of images and ideas that we call culture. Dr. John H. Walton, whose writing and teaching has been formative to me in my study of the creation account in Genesis, says, “When we study an ancient text, we cannot make words mean whatever we want them to or assume that they meant the same to the ancient audience that they do to a modern audience.”1

This is where I get to enter into the conversation as an artist, as a visual theologian, to uniquely marry words and ideas and create a visual space for others to encounter them. I believe it is important to create a visual space for people to experience the Genesis creation account in a new way not only because we are image-driven, but also because we need to be freed from the faith-science duality and invited to understand Genesis as an ancient cosmology—a creation account that used conventional imagery of its day and information about the ancient Near Eastern observable universe to convey truths about why the God of the Hebrew Bible was different from the seemingly endless options of their ancient neighbors.
​
This view of Genesis as ancient cosmology conveys deep metaphysical truths about who God is, what he is capable of, who humans are, and what he has given us. It also tells us why the world is not as it is supposed to be and what God promises to do about it.
Early in my study of Genesis, I learned that in Genesis 1:2, “Now the earth was without form and void, and darkness was over the face of the deep. (ESV)” the Hebrew phrase for “without form and void” is tohu va vohu. Tim Mackie translates this phrase, “wild and waste,” and it refers to a disordered, pre-creation state. Because in the ancient Near East, metaphysical concerns of what constituted existence vs. nonexistence were primarily concerned with form and function rather than matter, this is less about the world being nonexistent from a material standpoint and more about the world being without purpose and order. This idea is rich for an artist in the process of creation, because what an artist does, essentially, is order pre existing material to give it meaning.

I used to save bits of paper towel in a jar in my studio that I had used to wipe up ink runoff because they were beautiful, crusty with pigment and texture, layered and interesting. I didn’t know what to do with them, and eventually threw them away. They had no function. I had given them no form, no order.
This came to mind as I worked out ways to express tohu va vohu. I had previously used rice paper and vellum in paintings. I used these surface materials along with kozo and put them through an experimental process of crumpling, soaking, and then multiple rounds of “dyeing” in acrylic ink laced with mica and pigment powders. The results were beautiful pieces of crumpled paper that shimmered and sparkled in the light. All that was left was to give them order. The previous example of the illumination of day one of creation was created using pieces of kozo that had gone through this process and were then cut to fit the design (much like quilting). 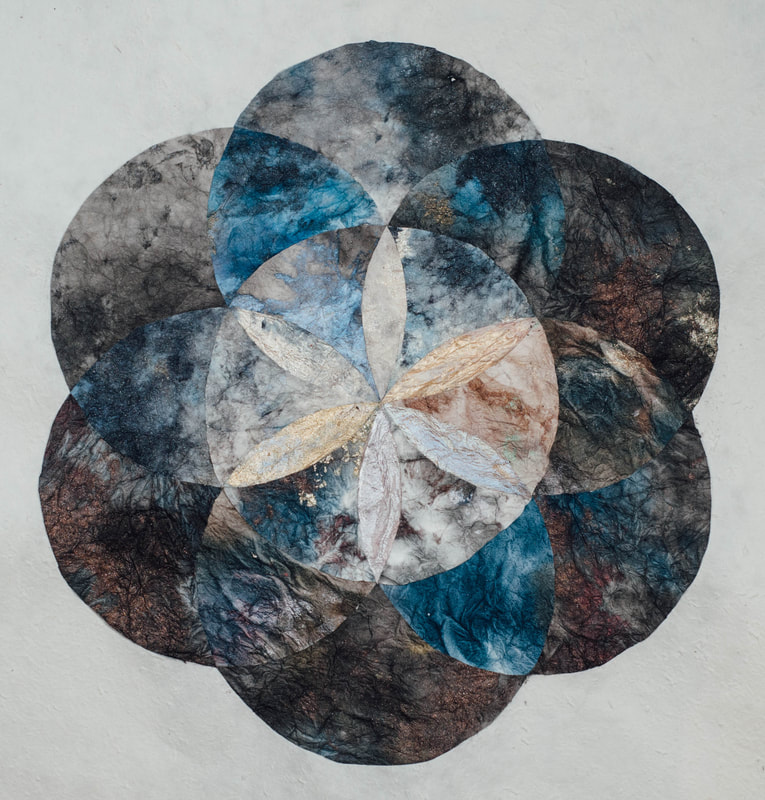 Study for Day One of creation: light separated from the darkness.

BEHIND THE SCENES GALLERY