​Mary’s Hymn of Praise, commonly known as the Magnificat, is found in the first chapter of The Gospel of Luke and is one of the most beloved and excerpted hymns in the entire Bible. Through this hymn, we can see Mary as the first evangelist, singing in this spirit-filled hymn of a Messiah who would bring God’s Mighty Kingdom to earth and tip the world’s hierarchies upside-down to glorify God and save his people.  We shouldn’t be surprised that the Magnificat is found only in Luke’s gospel, because Luke gives voice to many key female players in God’s mission who are entirely passed over in the other gospels. As a brief overview to the content of this hymn, I would like to break the Magnificat into three sections.
I. God is holy, and his plan is always better than ours.
Through Mary’s song we get a multifaceted view of the God she serves and the way he will go about his mighty, redemptive work. In the first six lines, we see aspects of God’s goodness based on his actions toward Mary specifically. In the ancient Near East, Mary held none of the markers that could give her any kind of cultural or social status. First, she was a woman. Women were valued chiefly as property in her culture, and their opinions were so undervalued that they couldn’t even serve as witnesses in court. A woman’s status was earned chiefly through family relationships: marriage and sons. Mary was young, poor, and unmarried, and therefore had yet to bear any children. She had no value by her world’s standards. And yet, God’s upside-down Kingdom values even the lowest of the low. God chose a humble, poor, unmarried woman as his vessel. This God, the author of all that is seen and unseen, could have begotten his Messiah in whatever way he chose, and there is no doubt Mary knew this, and she stands in awe of the God who chose her. Mary, paradoxically pregnant and yet a virgin, hadn’t even told Joseph or her parents that she was pregnant at the time she sang this hymn of praise. She had to have known there was a chance that they would not react favorably and that her relationships, status, and life would be in danger. And yet, being filled with the spirit of God, she does not dwell on her circumstances but rejoices in God’s mighty redemptive work in her.

II. God is just, and his Kingdom is not of this world.
Mary’s song does not stop at how God has blessed her, but it radiates outward to his greater redemptive work. In the six middle lines, she sings of how God's mercy extends to all who fear him. She tells the story of how this Messiah will bring justice, exalt the humble, and bring riches to the poor in spirit and the outwardly oppressed. Over thirty years prior to Jesus’ famous sermon on the mount, when he was yet in the womb, shades of Matthew 5 were already spilling from his mother’s lips.

III. God keeps his promises, no matter what it costs him.
It is appropriate that this young Jewish woman would close her song by marveling at God’s steadfast love in the last four lines. She invokes a Psalmic voice, drawing on imagery from thousands of years of scripture and Jewish tradition all the way back to Genesis when God made his covenant with Abraham. Here we see Mary placing herself into God’s greater story, and while she recognizes that she is but a humble thread in his great tapestry, these lines echo with the marvel of what came before: she is carrying God’s child, the Messiah. She is a physical homage, a remembrance, of God’s mercy. Through Mary’s word, God invites us to ask ourselves, “What must this God be like, who knew from the foundations of the world that he would save his people through this humble woman, and that the child in her womb would make all things new?”  It should not be lost on us that God’s redemptive plan, first proclaimed in Genesis 3:15, started with Abraham’s only son and ends with the sacrifice of Jesus, his only son.

It is not probable that Mary understood, at this time, the scope of suffering that both she and her son would endure to see God's mission through. God faithfully equipped Mary with himself throughout her life, ultimately redeeming her and reconciling her to himself in perfect fulfillment and satisfaction through her son. It is our hope that through this feast of scripture, art, and prayer, you will see God's perfect holiness, his mighty justice, and his wasteful grace made manifest in Mary's spotless son, the God-man, the death of death, and the Savior of the World. 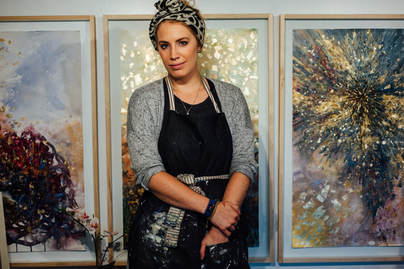 Kelly Kruse uses her work to explore the painful, beautiful experience of human longing and suffering. She developed a visual devotional practice as a response to her battle with depression, through which she wrestles with beauty, longing, and God.  Kruse describes her work as contemporary illumination. Like the medieval monks who perfected the art of illuminated manuscripts, she seeks to awake in the viewer a sense of spiritual contemplation. Her first exposure to the idea of illumination came when she studied Medieval and Renaissance music and art in Italy. Her background in classical music and opera puts her in a unique position to explore the intersection between scripture, poetry, musical works, and the visual arts. In addition to her artistic practice, she works as a music educator in the Kansas City metro area.
@kellykrusecreative 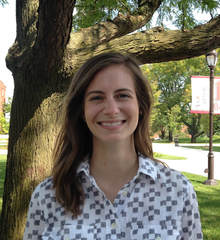 ​​Kathryn Bradford Heidelberger is a theologian and minister currently residing in the western suburbs of Chicago, IL. She has a Master of Divinity from Princeton Theological Seminary and a Bachelor of Arts in Theology from Wheaton College (IL). Her primary academic and vocational interest is ecumenical and interfaith theology, and she finds Mary, the mother of Jesus, a compelling and helpful conversation partner in this endeavor. She is married to her best friend, Max, and they enjoy spending time outdoors, reading, and writing together. 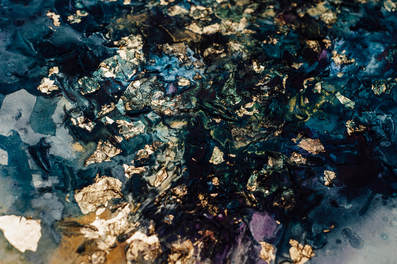 ​
Each time I consider the way in which God entered into the world to do his redemptive work, I'm drawn more deeply into my obsession and fascination with him. And there are always questions in me: why would he choose such a humble, painful path to redemption? Why would he be so categorically wasteful, so contrary to what we might expect? It certainly isn’t because we earned it—so my answer can only be that he loves us at an inconceivable cost to himself, and I always end up standing under him in awe. He chooses a humble vessel in Mary and comes to a world that physically and emotionally resists making room for him. He chose to be born a helpless baby to a poor, young virgin, and he died on the cross, still poor, humiliated, and forsaken, all that we might be reconciled to God by no merit of our own. What kind of God does that?

I chose to work on paper and to mount this work in unassuming, humble wooden frames to mirror the humility of Mary and the lowliness of Jesus' own social status. To juxtapose this with the medium of acrylic ink and metal leaf layered over texture paste feels extravagant and almost wasteful to me, mirroring God’s grace. The gold foil is often buried, crinkled, and resplendent even in the darkness. Seeing that fragile beauty buried in dark ink reminds me of what Christ did on the cross, and it becomes more beautiful to me in that imperfection. In this body of work, I occasionally drew on some traditional Christian iconography, but often I simply used color, texture, and gestures to convey some small sliver of this multifaceted text.

The process of working with this medium is very wet and time consuming. I work flat and in many layers, and while I always set out with a plan, I inevitably end up intuitively following the wet ink as it slides across the paper. In other words, I set out to paint purposefully and often end up waiting to see the painting revealed to me. I pay attention to it as it dries and shifts before me. It is a very spiritual practice: first I am invited to know more about God through his text, and then I invite the Holy Spirit into my artistic practice, waiting to notice things as I work that might point me back to God. The real beauty of this process is that it doesn’t stop with me. I invite you, the viewer, to step into the finished works and see what you will. I encourage you to invite the Holy Spirit in as you meditate on God’s word and read Kathryn’s prayers. We are so grateful to have you here, feasting on Mary’s Song with us.

When Kelly first invited me to collaborate on this project, I immediately began thinking about the medium my collaboration could look like as a theologian. If the artist’s medium includes paint, ink, acrylic, or clay, what does the theologian wield in honing their theological craft?  For me, the answer is prayer. Ultimately, theology is an outworking of prayer; it attempts to put on paper the deepest longings and groaning of the human heart. Most often, it fails, but I don’t think that means we should give up on theology all together. Theological reflection, as an outworking of prayer, is a form of worship; it asks us to cultivate faith in the work of God by putting pen to paper—taking risks to articulate what we believe and why.

As I began writing the prayers to accompany Kelly’s paintings, I found myself praying in a certain liturgical direction. You’ll notice the prayers are inspired and formed after collects, calls to worship, Psalms, Gospel readings, prayers of intercession, Eucharistic blessing, and benediction. There’s a subtle movement to Mary’s song—movement from personal adoration and praise to corporate thanksgiving and blessing. The prayers attempt to mirror that movement as an invitation to worship the mighty God who magnifies Mary, who in turn magnifies God.

You might find yourself calling the prayers poems—I certainly have! Some of the prayers take on a poetic shape. Throughout this creation process, I was continually drawn to the paradoxes and juxtapositions of Mary’s story—God becoming human, lowly girl exulted, rich and might sent away, hungry and humble filled. Poetic language helped me write those juxtaposed images in a way that honored the differences while bringing them together in a single prayer.

One of my theological mentors often said that theology is done on our knees with open hands. However you are drawn to interact with this exhibit, these prayers are my humble invitation to come with open hands and bent knee in worship and awe of the mighty acts of God, brought forth in Mary’s body and word.

​My soul magnifies the Lord
Luke 1:46b

​and my spirit rejoices in God my Savior
Luke 1:47

​for he has looked upon the humble estate of his servant
Luke 1:48a

​For behold, from now on all generations will call me blessed
Luke 1:48b

​for he who is mighty has done great things for me
Luke 1:49a

​And his mercy is for those who fear him
Luke 1:50a

​He has shown strength with his arm
Luke 1:51a

​he has scattered the proud in the imaginations of their hearts
Luke 1:51b

​He has brought down the mighty from their thrones
Luke 1:52a

​and exalted those of humble estate
Luke 1:52b

​he has filled the hungry with good things
Luke 1:53a

​and the rich he has sent away empty
Luke 1:53b

​He has helped his servant Israel
Luke 1:54a

​in remembrance of his mercy
Luke 1:54b

​to Abraham and his offspring forever
Luke 1:55b